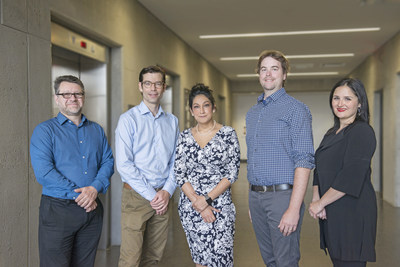 CHUM has just put a “cleanroom” into operation to culture cells for clinical treatment, and acquired Canada’s first advanced closed-system cell sorter as part of this project. The sorter, manufactured by Miltenyi Biotec in Germany, was purchased for $500,000 and provided by the Montreal Cancer Institute.

There are only about 20 such units in the world. The closed system maintains cell sterility, as well as the safety of patients receiving infusions. The device uses fluorescent dye labelling to sort anti-cancer T-cells. When the unit detects fluorescence, a microchip valve opens, enabling only T-cells to pass into another chamber. It is this valve, which can open and shut 30,000 times per second, that makes the instrument so special.

New Generation T-Cell Therapy
Tumours contain a small number of T-cells, which can fight cancer to a certain point, but usually lose the battle. In the early 2000s, scientists learned how to grow patient tumour T-cells in incubators. Infusing patients with their own T-cells yielded hopeful results with skin cancer.

“We want to boost the effectiveness of this immunotherapy and streamline it to treat skin and other cancers. Rather than indiscriminately giving patients all the T-cells present in their tumours, or performing labour-intensive and imprecise T-cell selection techniques, the sorter now lets us pick the most combative T-cells from the start and reduce the time to formulate a “anti-cancer T-cell”-enriched infusion,” explained Dr. Simon Turcotte, a surgeon at CHUM, a researcher at CRCHUM and a member of the Montreal Cancer Institute.

The final cellular product to be injected into CHUM patients will be produced at the Centre d’excellence en thérapie cellulaire at Hôpital Maisonneuve-Rosemont of CIUSSS de l’Est-de-l’île-de-Montréal.

“Part of the solution, in other words, already resides within patient tumours. With far greater precision than ever before, we now activate these immune cells in the lab in ways we cannot within the body,” Dr. Turcotte added.

Big Demand for patients who no longer respond to standard treatments
“I see dozens of patients every year who no longer respond to standard treatments and want viable alternatives,” said Dr. Rahima Jamal, an oncologist specializing in skin cancer and a clinical researcher. “Over the past few years, I have referred several patients to research teams outside Québec who were studying T-cell transfers to fight cancer. Some of the patients survived longer or are still alive partly thanks to this approach. We now want to bring this immunotherapy program, in an upgraded format, to Québec.”

“Having had stage IV melanoma since 2013 and exhausted all standard treatments, I participated in a research project in Toronto in 2015, While not completely curing my disease, the cell therapy using my own tumour infiltrating T-cells (TILs) apparently enabled my body to respond more positively to another kind of immunotherapy. The project thus helped stabilize my disease and let me lead a more normal life. The fact that CHUM is developing an even more effective immunotherapy here is excellent news and one more step toward conquering cancer,” said Frédéric Tremblay, a 38-year old patient.

Solid Cancer Immunotherapy Hub
Réjean Lapointe, PhD, Director of CRCHUM’s Cancer Unit and Scientific Director and Researcher at the Montreal Cancer Institute, said that the clinical cell culture room and the acquisition of leading-edge equipment confirms the important role CHUM intends to play in immunotherapy of solid cancers, such as human tissue and organ tumours: “We are the first in Canada to develop a cell sorter protocol for selecting T-cells from tumours for treatment. Other groups in Canada, the US and Europe have already achieved encouraging results without T-cell selection. Within two years, we plan to introduce our far more advanced version of this treatment in a pilot study for skin cancer patients not responsive to standard treatments, before subsequently developing it on a broader scale to fight other solid cancers.”

We are proud to be developing this innovative, promising treatment, with the financial support of the Montreal Cancer Institute and the expertise of CHUM’s researchers and health professionals. Our research, which can be applied directly to patient needs, is fully consistent with our mission and is conducted in conjunction with other members of Québec’s healthcare system,” concluded Vincent Poitout, Director of CRCHUM.

Spokes persons are available in Montreal or by phone for interviews in French and English :
514 246-0567