// Blueair removes microplastics from the air

Blueair removes microplastics from the air 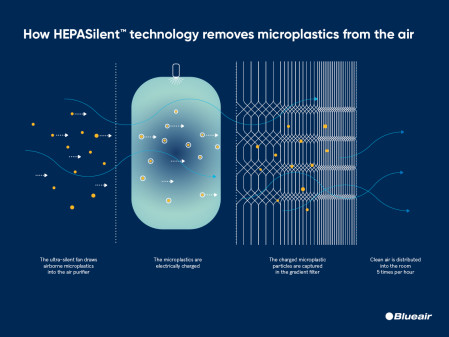 Stockholm, 5 June: In the wake of recent research on the negative human health effects of breathing microplastics, Blueair, a world-leader in air purification solutions for home and professional use, is happy to announce that all its air purifiers remove airborne microplastics.

Research published by the Fernando Pessoa University in Portugal shows that every day we breathe in up to 130 tiny plastic particles. Due to their small size, microplastics once inhaled, travel into the deep lung where they may induce lesions in the respiratory system. Microplastics found in lung tissue indicate that the body is not able to rid itself of the particles – i.e. that the microplastics are bio-persistent.

“Microplastic particles penetrate the deep lung tissue and cannot be removed, or “digested”, by the human immune systems” explains Kevin Luo, PhD in Particle Deposition in the Human Respiratory System, and senior air filtration expert with Blueair. “The smallest particles can also pass into the bloodstream and cause cardiovascular and cerebrovascular diseases, induce cancer, and affect the human immune and nervous system” continued Luo.

Luo noted that children are particularly at risk: “Children breathe more rapidly than adults, taking in more air in relation to their body weights. This makes them more vulnerable to microplastic pollution. Children are also more at risk as their respiratory systems are still developing – and small children often spend time playing on the floor, where microplastics settle in the form of dust” said Luo.

Microplastics have been found in both indoor and outdoor air. However, the concentration of microplastic pollution in the indoor air is higher than outdoors according to findings presented in 2018 by researchers from École Nationales des Ponts et Chausées. Considering that we spend about 90% of our time indoors, this poses a significant health risk.

Microplastics in the indoor air result from the fragmentation through friction, heat or light of plastic objects found in our homes. These include paint, toys, furniture and other plastic objects as well as personal care items like cosmetics, toothpaste and scrubs. Another source of microplastics found in the air is that of plastic fibres released from synthetic clothing and textiles used in home furnishings.

Airborne microplastics may also carry other toxic pollutants found in the air, from bacteria to traffic emissions, into the bloodstream from the lungs.

Top 10 tips on how to reduce airborne microplastics at home

1. Ensure good ventilation in your home - the concentration of airborne plastics is much higher in indoor air than in outdoor air.

2. Vacuum frequently to free your floor from microplastic dust that collects there.

3. Reduce or remove carpets, which trap plastic fibres and particles.

4. Choose a hardwood or ceramic tile floor. Vinyl and linoleum flooring can release microplastics into the air.

5. Avoid synthetic clothing as they shed plastic fibers, which can be inhaled.

6. Use organic, natural fabrics and textiles in home furnishings.

7. Do not buy toys made of plastic or that have plastic parts. Opt for wood or natural rubber toys instead.

9. Drink filtered tap water instead of water from single-use plastic bottles to reduce the amount of plastic you bring into your home.

10. Put an air purifier in the rooms where you spend most of your time. All Blueair air purifiers for home remove airborne microplastics.