TORONTO, March 19, 2018 /CNW/ - By combining Canadians' unique love for loyalty points and our intense attachment to our smartphones, Toronto-based Carrot Rewards has become the country's top wellness app and one of the most powerful case studies for leveraging the effectiveness of Nobel Prize winning Nudge Theory. 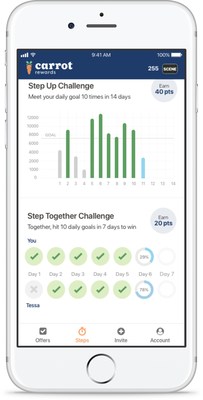 To build on its popularity and to coincide with its second anniversary, today Carrot announced the launch of its new Step Together Challenge platform — the world's first peer-to-peer rewards for physical activity. The new in-app feature encourages Canadians to team up with their friends to earn even more rewards for achieving their daily step goals.

Carrot's Step Together Challenge harnesses the science of Behavioural Economics and the power of "Social Nudges" to create even stronger motivations for its users to achieve their personalized physical activity goals. The new feature aims to further boost the celebrated health outcomes of the popular Canadian app, including an unprecedented 20 per cent average increase in daily physical activity among its hundreds of thousands of users across the country.

To introduce the new Step Together Challenge, Carrot is offering double points for the next two weeks to all Canadian users who try this innovative new feature.

"We are incredibly proud to broaden our impact on the daily behaviours of Canadians in such a significant way," said Andreas Souvaliotis, Founder and CEO of Carrot Rewards. "The Step Together Challenge offers our users the ability to team up to get even more active and earn even more of their favourite reward points. This new layer of social support, paired with the power of incentives, is a natural evolution for the Carrot platform, will result in even stronger social impact!"

Bond Brand Loyalty, a leading global customer engagement agency, has ranked Carrot among the top 10 Canadian loyalty programs in The Loyalty Report 2018. More than a quarter-million unique users are on the app on any given day and Carrot was recently named Canadian App Of The Year.

"We have now awarded over one billion loyalty points to Canadians for learning about and making positive lifestyle choices for themselves, their families and the environment," explained Souvaliotis.  "Just two short years after our launch in British Columbia, nearly one million Canadians have now downloaded our app and we have measurably influenced tens of millions of small and meaningful lifestyle choices from coast to coast."

About Carrot Rewards
Carrot Rewards is an AI-driven public engagement platform that leverages behavioural economics and nudge theory to motivate Canadians to make better everyday lifestyle choices. Carrot harnesses the power of the most popular consumer loyalty programs in Canada to maximize appeal and user engagement. Carrot users earn their choice of Aeroplan® Miles, SCENE®Points, Petro-Points™, More Rewards® Points and Drop points each time they interact with the app — with reward options expanding further in 2018. The Carrot platform was created in collaboration with public sector agencies, the three leading Canadian health NGOs and the private sector. With over a million downloads across Canada, Carrot is the most popular and trusted engagement platform in the country. In 2017, Carrot was recognized as Canadian App of the Year and ranked as a Top 10 Loyalty Program in the country by the Bond Brand Loyalty Report.