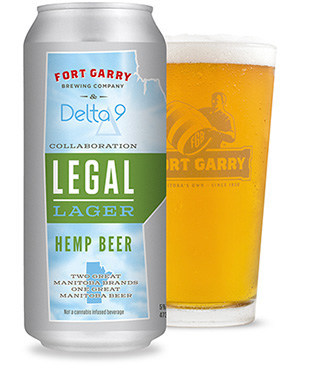 Delta 9 Legal Lager is now on sale at MLLC liquor outlets across the province, and is the first beer produced as a collaboration between a brewery and a legal cannabis company. Delta 9 provided the raw hemp material for the beer while Fort Garry Brewing is responsible for production and marketing. Both companies shared the cost of research and development.

Legal Lager is an alcoholized beer infused with material from hemp seeds, and therefore contains no cannabis or any other psychoactive agent produced from the cannabis plant. However, the hemp beer released this week is a first step in an ongoing research and development project to jointly produce a cannabis beer that contains THC.

The two companies are currently developing a co-branded, cannabinoid-infused beer that contains no alcohol. Release of that Phase 2 product would be developed internally as a concept beverage, and would not be sold or made available to the public until it is approved by Health Canada and relevant provincial regulatory bodies.

Under the agreement, Delta 9 will incur the costs and responsibility for marketing and distribution of the Phase 2 cannabis beer, which could not legally be sold in liquor stores.

"Since Delta 9 is one of the companies awarded a retail license from the Province of Manitoba, we are ideally placed for distribution and sale of this type of product," explained Delta 9 CEO John Arbuthnot.

"Legal lager is a hemp based beer, so it's something new we've created," said Fort Garry's head brewer Daniel Geddes. "It's quite unique in the industry and there's not a lot of hemp beers available. We wanted to add a little more complexity to this beer, as well as showcase the hemp itself.

"Frankly as it competes with alcohol or soda pop or other beverages, we've got something that's lighter on alcohol and doesn't give you a hangover; that's a pretty competitive value proposition," Arbuthnot said.

Coverage of the Legal Launch can be seen on CityTV News: https://winnipeg.citynews.ca/video/2018/06/08/hemp-infused-beer-coming-to-canada/

"We see this as a great partnership between two of Manitoba's best-known brands," Arbuthnot added. "Fort Garry Brewing is one of the best craft brewers in Canada and they make my favourite beer, while Delta 9 is truly Manitoba's Own Cannabis Producer.

"This is a Made-in-Manitoba product that's ready for people in our province to enjoy this summer."