// Donation and Transplant in Ontario Makes Headway in Last 10 Years

Donation and Transplant in Ontario Makes Headway in Last 10 Years 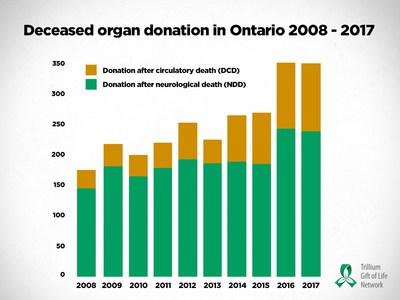 Trillium Gift of Life Network (TGLN), Ontario's government agency responsible for organ and tissue donation and transplantation, released its 2017 results today and reviews its progress over the past 10 years (January 1, 2008 – December 31, 2017).

TGLN has applied a number of leading practices that have contributed to its success over the last decade, including: implementing routine notification at 69 hospital corporations, which requires hospitals to refer all potential donation cases to TGLN, and appointing 58 donation physicians that work alongside the hospitals' executive and operational staff and TGLN to ensure donation is part of quality end-of-life care.

Ontario is a leader in donation

TGLN's leading practices have included the application of donation after circulatory death (DCD), which, in conjunction with other advanced efforts, has been a significant contributor to the growth of deceased organ donors in Ontario.

There are two types of donation after death: donation after neurological death (NDD) and donation after circulatory death (DCD). DCD is an option when a patient has a severe neurological injury, with no chance for recovery, and the decision to withdraw life-sustaining treatment has been made. The first DCD case in modern Canadian history was performed in Ontario in 2006. In the last 10 years, DCD has increased by 260 per cent and today, approximately 1 in 3 organ donors are a result of DCD.

One tissue donor can enhance the lives of up to 75 people: eyes can restore sight; skin can help burn patients; bone can be used for joint replacements; heart valves can help patients with congenital heart disease; and tendons and ligaments can help people walk and run.

"We all, as Ontarians, deserve to feel great pride in the advancements in our province's donation and transplant system," said Ronnie Gavsie, President and CEO, Trillium Gift of Life Network. "More and more medical conditions are being treated by organ transplant; more and more lives are being saved; we have an internationally renowned system. But as long as there are people waiting for a lifesaving organ transplant, there is much more to be done. Together, with our committed hospital partners, we are continuously working to make improvements to ensure that there are no missed opportunities for donation."

A culture of donation in Ontario

"Ontario's success in organ donation and transplant is only possible because of the incredible donors and their families who make the generous and difficult decision to give the gift of life," said Dr. Eric Hoskins, Ontario's Minister of Health and Long Term Care. "Because of their gift, over 1,200 people were given a second chance at life in 2017. Register today at www.BeADonor.ca and give hope to the 1,500 people waiting." 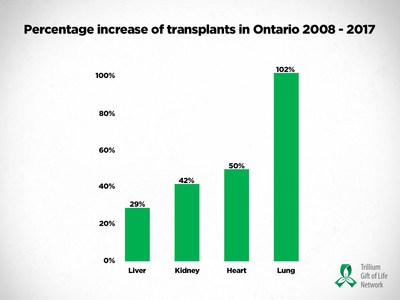