// For the First Time: Fastest Growing Frozen Pizza Brand in the U.S Launches in Canada

For the First Time: Fastest Growing Frozen Pizza Brand in the U.S Launches in Canada 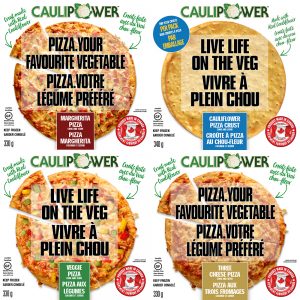 Made in Canada and Available at Sobeys, Whole Foods Market and Select Retailers Beginning This Month

CAULIPOWER is the leading innovator in the category, hacking America’s comfort foods to make them more convenient and nutritious. CAULIPOWER disrupted the American market last year with its debut cauliflower-crust pizza line that doesn’t hide vegetables but celebrates the nutritious and delicious food group as the star of the meal. The naturally gluten-free pizzas are lower in calories, sugar, fat, and sodium and higher in protein, fiber, and vitamins than most traditional and gluten-free pizzas, while being naturally nutrient-rich, gluten-free, and delicious. CAULIPOWER went from 60 stores to 8,000+ in the U.S in just one year.

“Even before expanding in the U.S., we received an outpouring of requests from our Canadian neighbors to bring CAULIPOWER up north! Well, we listened and now are incredibly proud to produce the pizzas right where they'll be enjoyed,” said Gail Becker, Founder and CEO of CAULIPOWER. “With the increased availability of information about the food we eat, more and more people are seeking healthier options, but may not have the time, access, or resources to make those choices happen – CAULIPOWER is here to help bring everyone together over one, better-for-you plate.”

For more info and to find a Canadian retail location near you, visit: www.EatCAULIPOWER.com

Former Edelman President, Gail Becker, launched the company in February 2017 with an introductory line of frozen pizzas and plain crust that quickly became the fastest growing frozen pizza brand in the U.S. Inspired by her two sons with celiac disease, Gail cracked the code with an easier way to make cauliflower crusts accessible to busy, modern families. CAULIPOWER proudly supports OneSun, a program creating edible gardens at underserved schools across the country to educate kids on where their food comes from, combat obesity and inspire a new generation to love and harvest vegetables. To learn more, find a retailer or get recipe inspiration at EatCAULIPOWER.com and with the @CAULIPOWERED community on Facebook, Instagram, Pinterest, and Twitter.