VANCOUVER, Oct. 17, 2018 /CNW/ - A new mobile app aims to help people with early dementia or mild cognitive impairment to manage daily activities and keep track of how they are doing, providing greater independence. 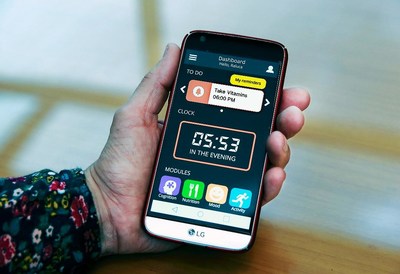 The novel technology guides users through their day. Using audio, text or visual prompts, it reminds people to carry out tasks and activities such as taking medications, going to appointments, preparing meals ‒ as well as making healthy food choices.

Called DataDay, the app also helps people track their cognition, mood and physical activity. It captures information as users engage with it, reminding them what they've done and charting any changes in their condition.

Its name is a play on "day-to-day" because it structures and follows users' daily routines.

"Most people once they have a diagnosis go home and live life with dementia. We want to give people something they can use for personal support and to keep track of how they are doing," explains Dr. Astell, who holds a Research Chair in Dementia Wellbeing at the Ontario Shores Centre for Mental Health Sciences in Whitby, Ontario.

AGE-WELL supported research focusing on the needs of older adults, caregivers and clinicians in using the app, while the Baycrest-led Centre for Aging + Brain Health Innovation (CABHI) financed the technical development of the app and portal. UK-based New Dynamics of Aging funded the first phase of the technology.

Beta testing of DataDay is now starting in Durham Region in Ontario. The app, or a device with it installed, will be provided initially to patients of local memory assessment clinics, which will keep track of users through a special portal for those who opt in.

DataDay is made for Apple and android smart phones and tablets. "We've made the way you interact with it and the type of information collected responsive to what users would like. They helped shape it," says Dr. Astell.

One of them is Alex Vanderzand, 75, of Pickering, Ont., who was diagnosed with mild cognitive impairment in 2014 and feels that DataDay will be a "real benefit" to keep track of activities and record what he's done each day.

"When I first got the diagnosis, I felt like I was thrown to the wolves," says Vanderzand, who is especially concerned about being a burden to his wife Penny, 73. She's also part of the testing process for the app and thinks caregivers will find it helpful too. "It's going to give everybody a tool to help function," she says.

DataDay is designed for people with a range of types of dementia, including Alzheimer's disease, frontotemporal dementia and primary progressive aphasia. It is intended for use from the early stages of cognitive decline to moderate dementia, and for mild cognitive impairment, which many people experience before dementia.

"The aim is for people to start using DataDay as early as possible. We hope that once the app becomes part of their daily routine, they will keep using it as their dementia progresses," says Dr. Astell, adding that it is best if a health service, such as a memory clinic, assists with set up and monitoring.

Once the early roll-out in Durham is completed in March 2019, the plan is to make the app widely available through memory clinics. A French version will be created.

By capturing accurate information on how someone is doing, the app can help users, caregivers and their clinicians decide whether or not additional health services are needed. It's hoped that this will cut down on emergency room visits, she says.

"We can give people with dementia some control over their lives – and better plan services when they need help."

AGE-WELL NCE Inc. (http://www.agewell-nce.ca/, @AGEWELL_NCE) is Canada's Technology and Aging Network. AGE-WELL brings together researchers, older adults, caregivers, partner organizations and future leaders to accelerate the delivery of technology-based solutions that make a meaningful difference in the lives of Canadians. AGE-WELL researchers are producing technologies, services and policies/practices to improve quality of life for older adults and caregivers, and generate social and economic benefits for Canada. AGE-WELL was launched in 2015 through the federally-funded Networks of Centres of Excellence (NCE) program.