// Shelly-Ann Fraser-Pryce slams male sprinters for avoiding each other

Shelly-Ann Fraser-Pryce says that there should be more head to head match ups in the 100m. She slams the men for backing down on matches and not racing each other often enough. We couldn't agree more. If you train so hard put it on the line and compete! The origional article can be found here: 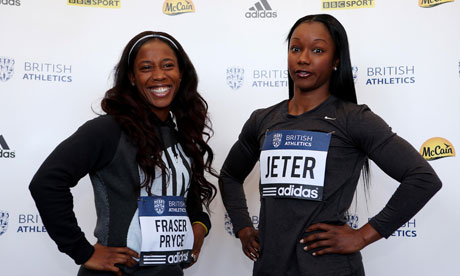 The double Olympic 100m champion Shelly-Ann Fraser-Pryce has criticised male sprinters for avoiding head-to-head competition in the build-up to major championships. The 26-year-old, who faces the world champion, Carmelita Jeter of the United States, over 60 metres in Birmingham on Saturday afternoon, said that while female sprinters regularly face each other throughout the season, the men had a habit of shirking the big showdowns outside championships.

"I definitely think there should be a lot more clashes," said the Jamaican. "I think it would get a lot more excitement, as opposed to just the one athlete competing with himself, basically. If he's No1 or No2 or No3 [in the world] and he's competing against people who are 21, 22 or 23 down the list, there's not much there they can expect. You know what will happen."

On the launch of the Diamond League in 2010 athletics fans were promised more head-to-head clashes between top sprinters such as Usain Bolt and Tyson Gay but, with the best male sprinters tending to command bigger appearance fees than their female counterparts, such showdowns are not cheap. "True. Yes, I think that's pretty much the problem," said Fraser-Pryce. "Who wants to pay for three of the top sprinters when they can all pay for one and have the headline?"

Inequality, it seems, still reigns in the sprint world. Fraser-Pryce feels the situation has improved but even she had to shrug her shoulders when relaying the tale of her arrival at Heathrow this week when an immigration official had no idea that the woman in front of her had won three medals at the London Games, including 100m gold, and instead was more interested in asking the sprinter if she knew Oscar Pistorius.

"I definitely think we have come a far way and now it's definitely getting better," she said. "[But] it's still not at the same level it is for the men and surprisingly the men hardly race each other. You hardly find there is a clash between a particular athlete while females, they can't avoid each other.

"I don't want to say it's an ego thing," she said, "but I definitely think we should have more clashes for male athletes. I think it would do wonders for the sport as well."

Surprisingly this will be Fraser-Pryce's first ever indoor race - her training partner and former world record holder Asafa Powell has been giving her tips on how to cope with the abrupt end -and she faces a tough line-up in Murielle Ahouré of the Ivory Coast who has already run 7seconds flat this year, as well as the second fastest woman in history, Jeter. "I know Carmelita and I have been having these duels very often and it's very good to compete against each other. I think it is good for the sport when we have rivalries and we have athletes who are never afraid to run against each other."

Britain's double Olympic gold medallist Mo Farah says he is not content to rest on his laurels, with his defeat over 10,000m at the last world championships in 2011 is still "nagging away" at him. "I want to defend my title and try to win the 10,000m this time," says Farah. "That race nags away. But you learn from your mistakes and I have learnt a lot from that race. It's important I come back."

The 29-year-old, who has just returned from a training camp in Kenya, will also be competing in Birmingham, a one-off race in this indoor season, when he takes on a mainly domestic field over 3,000m. With no East African presence to push him, Farah said he was not seeking to break any records