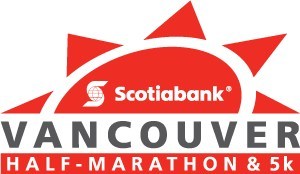 VANCOUVER, June 21, 2018 /CNW/ – More than 6,400 racers will be lacing up their shoes on Sunday, June 24, to participate in the Scotiabank Vancouver Half-Marathon and 5k, including some of Canada's top distance runners.

Kip Kangogo, of Lethbridge Albert, returns to defend his title as 2017 winner of the Scotiabank Vancouver Half-Marathon. Kip has won the event six times in the past 10 years and is always a strong contender. Challenging Kip will be Rob Watson, 4x Canadian Champion; Tony Tomisch, who recently placed third at the Vancouver Half-Marathon and Michael Eaton of Seattle.

In the women's race, a strong pack of three runners will be pushing the pace. Natasha Wodak, Canadian record holder in the 5k, 8k and 10,000m events; Dayna Pidhoresky running strong this year winning the Around the Bay 30k, Times Colonist 10k and second at the Vancouver Sun Run; and Cold Lake, Alberta resident Emily Setlack coming off a win at the Canadian Mountain Running Championships.

The media tent is located near the finish area on the south lawn of The Fish House in Stanley Park. Please check-in to arrange interviews and photo opportunities.

Run, walk, pledge or cheer on June 24, 2018, at the Scotiabank Vancouver Half-Marathon and 5k. It's not too late to help raise money for important causes in your community! Share why you race to support your charity, using the hashtags: #RunScotia #ScotiaHalf #InfinitePotential on Twitter and Instagram.

For more information about the Vancouver Half-Marathon and 5k and the Scotiabank Charity Challenge visit: www.vancouverhalf.com

About Scotiabank:
At Scotiabank, we aim to support organizations that are committed to helping young people reach their infinite potential. Young people are our future leaders and Scotiabank's goal is to help ensure that they have the necessary skills and resources they need to support their success. Together with our employees, the Bank supports causes at a grassroots level. Recognized as a leader for our charitable donations and philanthropic activities, in 2017, Scotiabank contributed more than $80 million to help our communities around the world.

Scotiabank is Canada's international bank and a leading financial services provider in North America, Latin America, the Caribbean and Central America, Europe and Asia-Pacific. We are dedicated to helping our 24 million customers become better off through a broad range of advice, products and services, including personal and commercial banking, wealth management and private banking, corporate and investment banking, and capital markets. With a team of more than 89,000 employees and assets of over $926 billion (as at April 30, 2018), Scotiabank trades on the Toronto (TSX: BNS) and New York Exchanges (NYSE: BNS). For more information, please visit www.scotiabank.com and follow us on Twitter @Scotiabank.