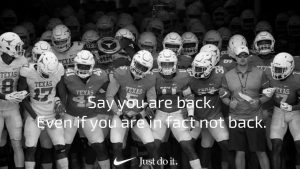 Lake Jackson, TX. (September 6, 2018) SwampButt Underwear (www.swampbutt.com) is proud to introduce the ‘College Football Coach On The Hot Seat’ award for week one of the college football season. Week one’s winner, with a full-on third-degree singe to his backside, is University of Texas head football coach Tom Herman.

For the second year in a row, Coach Herman and the horns lost to Maryland. On both occasions the horns were ranked in the top 25 and prohibitive favorites to beat the terps of Maryland. Even for a former flash in the pan – flavor of the month like Herman, the latest defeat is hard to figure as it came against a team that did not have a head coach. “Tom Herman gets paid $5 million a year to coach at Texas, while Maryland pays $0.00 a year for their head coach,” said SwampButt Underwear spokesman and reformed gambler Nick Heraldson. “Analysis of this data clearly demonstrate that the people in Landover, MD. are getting a better value for their investment in coaches than those in Austin, Texas are.”

Herman came to Texas by way of Houston where he coached one full season and a few games the second before he started shopping his resume and lost interest. In 2015, the Houston Cougars were 13-1, AAC champions and Chick Filet Peach Bowl champions with a defeat of Florida State. Houston posted impressive if improbable victories over two different Heisman Trophy led teams in Lamar Jackson’s Louisville Cardinals (twice) and Baker Mayfield’s Oklahoma Sooners. But the Herman magic was left in Houston along with all the broken promises that he made to boosters, administrators and his players while smooching each and every one. “This second loss to Maryland should not distract anyone from the fact that Texas also lost to Maryland a year ago,” Heraldson stated.

Texas’ and Herman’s underachievement on the field were the source of consternation, frustration and speculation during and after Saturday’s game. Some theories were:

While predicting the future is not something the SwampButt Underwear people profess ability in, the early money for week two is on Coach Kevin Sumlin of Arizona, Chip Kelly of UCLA or even Texas Tech coach Kliff Kingsbury. “All these guys were o’fer week one and two of the three have challenging games this Saturday,” Heraldson predicted. “UCLA plays Oklahoma and without much improvement the Bruins will reclaim their ‘legitimate doormat’ label from the 1980’s. Arizona plays Houston in Houston where fans remember that the last time Kevin Sumlin was there he ditched the Cougars a week before their CUSA championship game, costing them an undefeated season, and an invitation to the Sugar Bowl.” Heraldson continued, “Kingsbury is more suited to talking with the moms of recruits than being on the sidelines, ‘brah’. Tech’s game Saturday against Lamar is a lay-up brah, but they have Houston the week following…. Brah.”

Men’s Performance SwampButt Underwear is perfect for the guy who has sweat issues south of the belt or just likes to be comfortable. These incredible drawers were created to draw sweat away from the skin and are made with 91% polyester and 9% spandex.

SwampButt Underwear™ is a registered trademark in the USA and other countries. We paid a lot for it, so please do not use it without permission.

CAPTION: University of Texas head football coach Tom Herman wins the SwampButt Underwear Coach On The Hot Seat award for week one. At least he won something.