The company’s latest report: ‘H1 2018 Production and Capital Expenditure Outlook for Key Planned Upstream Projects in sub-Saharan Africa’ indicates that a total of 64 planned and announced crude and natural gas projects are expected to commence operations in sub-Saharan Africa between 2018 and 2025.

Joseph Gatdula, Oil and Gas Analyst at GlobalData, comments: "The total crude and condensate production from announced and planned projects in sub-Saharan Africa is expected to be around 2 million barrels per day (mmbd) in 2025 and the total natural gas production in 2025 is about 8.1 billion cubic feet per day (bcfd).” 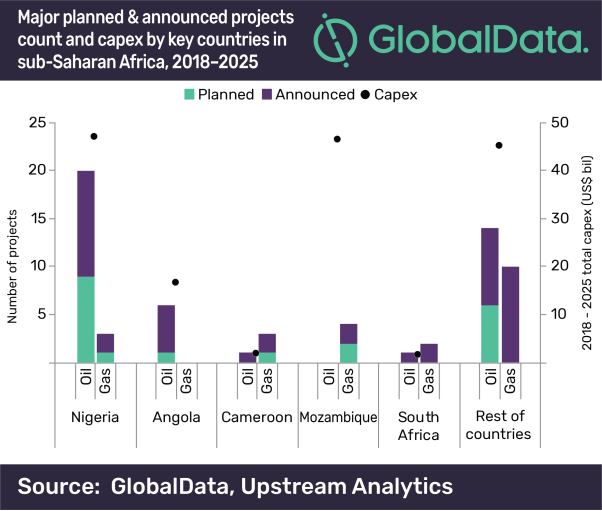 Among countries, the top three in terms of highest planned capex spending are Nigeria, Mozambique and Angola with around US$17.3bn, US$7.7bn, and US$5.1bn, respectively, during 2018–2025. With early-stage projects Indonesia Mozambique with a capex of US$38.5bn, followed by Nigeria with US$29.4bn.

Among companies, Eni SpA, Royal Dutch Shell Plc, and Total SA have the highest level of spending on planned projects with US$7.2bn, and US$5.6bn and US$3.4bn, respectively. The highest level of spending on early-stage announced projects is by Royal Dutch Shell Plc, Exxon Mobil Corp, and Eni SpA with US$15.5bn, US$12.9bn, and US$6.9bn spent on capex, respectively.

For expert analysis on developments in your industry, please connect with us on:

4,000 of the world’s largest companies, including over 70% of FTSE 100 and 60% of Fortune 100 companies, make more timely and better business decisions thanks to GlobalData’s unique data, expert analysis and innovative solutions, all in one platform. GlobalData’s mission is to help our clients decode the future to be more successful and innovative across a range of industries, including the healthcare, consumer, retail, financial, technology and professional services sectors.